The Visual Studio Emulator for Android does not ship with Google Play Services, so if you want to use those services, like Google Maps, you must install them.

Back in 2015, I outlined the installation steps, but those steps no longer work and the process is now much easier.

The GApps versions I have found to work are,

The Visual Studio emulators are x86 whereas most Android devices are ARM based. I find that many apps work as is, but for those that don't you should download and install Genymotion ARM Translation which provides ARM to x86 translations.

Download the ARM Translation ZIP, then drag it onto your running emulator. When the dialog opens, select Install and shut down.

Once it finishes installing, shut down and restart the emulator.

Installing GApps the same way by dragging the correct ZIP file and drop it on the running emulator. When the dialog opens, select Install and shut down.

When you are prompted, shutdown the emulator and then restart it.

Once the emulator restarts, open Google Play and sign in with your account. Once you are signed in, go to My Apps and update all installed apps. Once the various Google apps update, you will likely get notifications that you must update Google Play Services. Click on one of them to update. 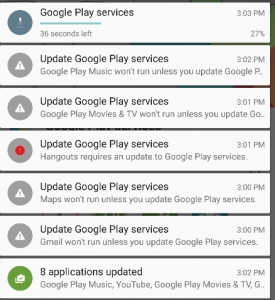 On several versions of Android, Google+ will crash repeatedly. Dismiss the crash dialogs and try to update it using Google Play. If this does not work, go into App Settings and disable it.

The version of GApps from Team Android crashed on Android 6.0, but I figured out a workaround based on z3ntu's post.